Without a pick until late in the second round, the 49ers did not draft for need, they drafted for the future. They strengthened position groups that already have depth.

Their first pick was defensive end Drake Jackson, who will join a defensive line that features Nick Bosa, Javon Kinlaw and Arik Armstead. Next, they drafted running back Tyrion Davis-Price, who will join Elijah Mitchell, Jeff Wilson Jr., and Trey Sermon. Late in the third round, they added Danny Gray to a receiving corps with Deebo Samuel (assuming the two sides work out a deal), Brandon Aiyuk and Jauan Jennings.

Jackson, Davis-Price and Gray will not be expected to become instant starters but they will be asked to play a role as they develop. They each have skill sets that the 49ers lacked before the draft and could help round out the team. Barring injury, the top three picks should not have great production this season but a modest contribution from each could go a long way for an already well-defined roster.

Jackson will come in and play the “Leo” position. He is a high-ceiling type player who has all the tools you want in a speed rusher. He’s explosive, can cover ground, has body control and has the ankle flexibility to bend the corner. He was not very productive in college (12 1/2 sacks in three seasons) because he had to move back and forth from positions and his body weight fluctuated in the process. With the 49ers, he needs to focus on firing off the ball and harassing opposing quarterbacks. In a radio interview with KNBR, GM John Lynch talked about the team’s vision for Jackson.

“But I can tell you what we envisioned when we drafted him. (It) was that we’ve been at our best when Dee Ford was healthy. I know it has not been much, but when Bosa was rolling, and Dee was opposite of him, we were pretty tough to deal with. We’ve been tough to deal with without Dee as well, but when you have a guy with the ability that Drake has, and that ability is immense, we see something special there. How fast that comes, to what extent, how much he plays, will he play early? I think a lot of that just comes down to how far he can come, how quickly. ”

At the owners’ meetings earlier this year, Lynch revealed that it is unlikely Ford will put on a 49ers uniform again because of complications from his neck and back injury. Without him, the 49ers have a group of mostly power rushers. Bosa is a well-rounded rusher with a great get-off but he relies on excellent hand fighting and power moves to win. Jackson is a different type of pass rusher with a body type that will concern opponents.

On third down, USC only rushed three with Jackson lined up over the right tackle. 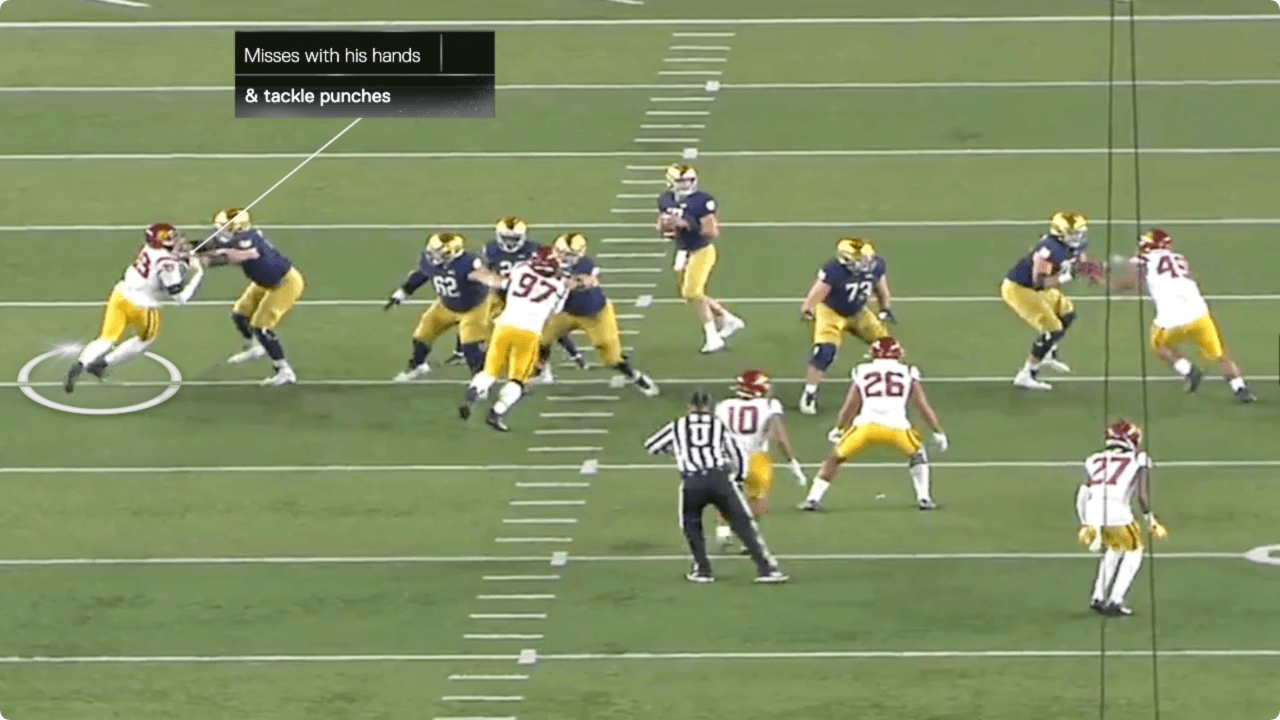 The offensive line slid in his direction. Initially, Jackson missed with his hands, allowing the tackle to punch Jackson’s chest plate with both hands. 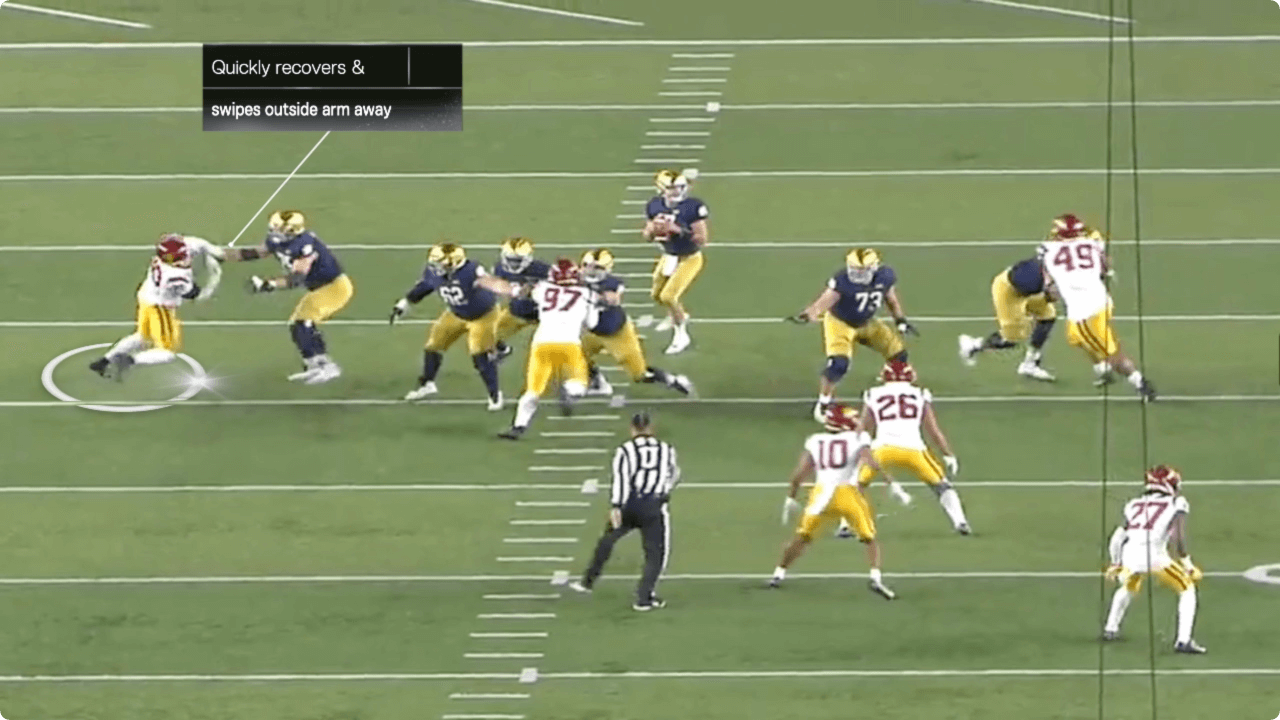 Jackson was able to quickly regain control of his hands and swipe away the tackle’s outside arm and step through to win the edge. 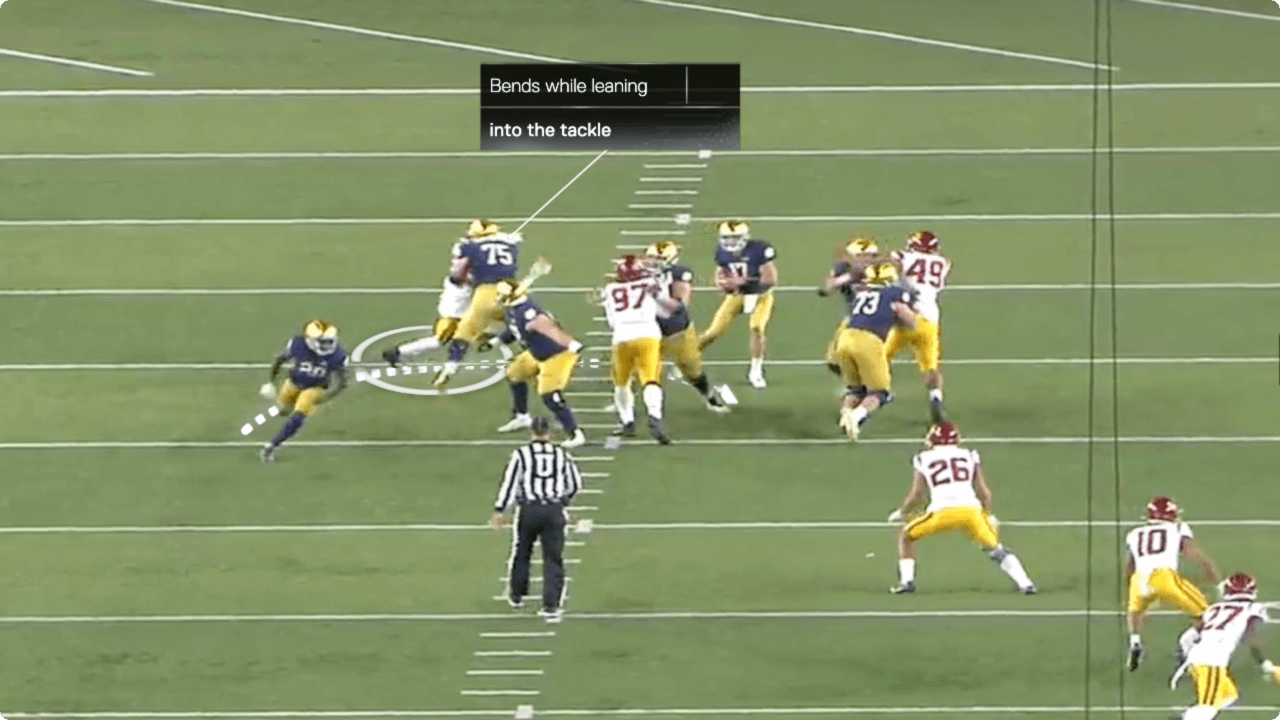 Then Jackson showed off his ability to bend the corner while leaning on the tackle to finish for a sack.

Jackson looks out of control at times but when he puts it all together you can see why the 49ers are bullish on his ceiling. With the 49ers, Jackson will get to work with one of the best defensive line coaches in the league in Kris Kocurek. In the past few seasons, Kocurek has been able to get career production from journeymen defensive linemen Kerry Hyder and Arden Key. His track record of development suggests that he should be able to get Jackson ready to contribute as a situational pass rusher as a rookie.

Running back depth is important for a team that emphasizes running the ball as much as the 49ers. Mitchell looks like he could be a star but missed five games, Wilson has had issues staying healthy throughout his career, and Sermon, a third-round pick in 2021, had trouble acclimating to the offense and could not earn playing time. Davis-Price adds depth to a talented but injury-prone backfield.

He also gives the 49ers a physical presence they lack when Samuel isn’t carrying the ball. Davis-Price isn’t the fast, smooth and athletic running back you’ll typically see in a zone system. He is a gap scheme, north-and-south runner who wants to bulldoze through defenders.

LSU vs. Florida, 3:16 remaining in the third quarter, second-and-6 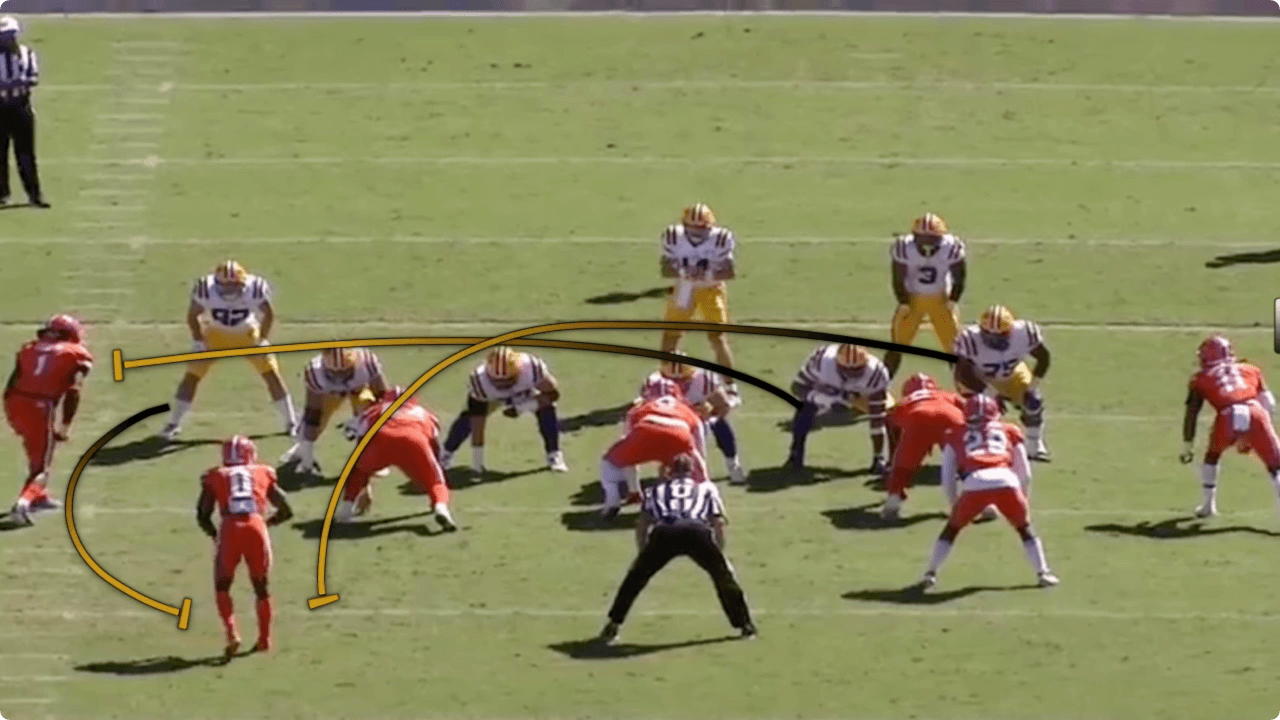 Here, LSU had a counter trey called with the left guard and tackle pulling to the play side. 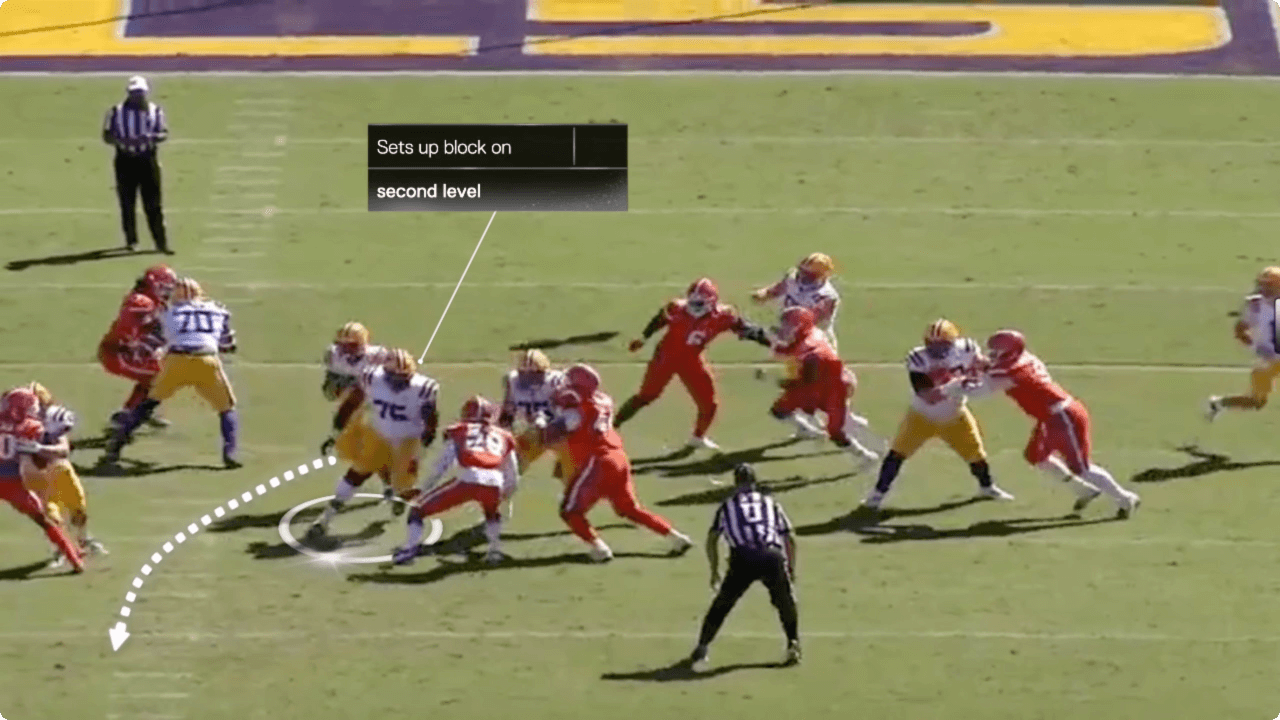 As Davis-Price approached the hole, he slowed down to wait for his tackle to get to the hole and block the second-level defender. 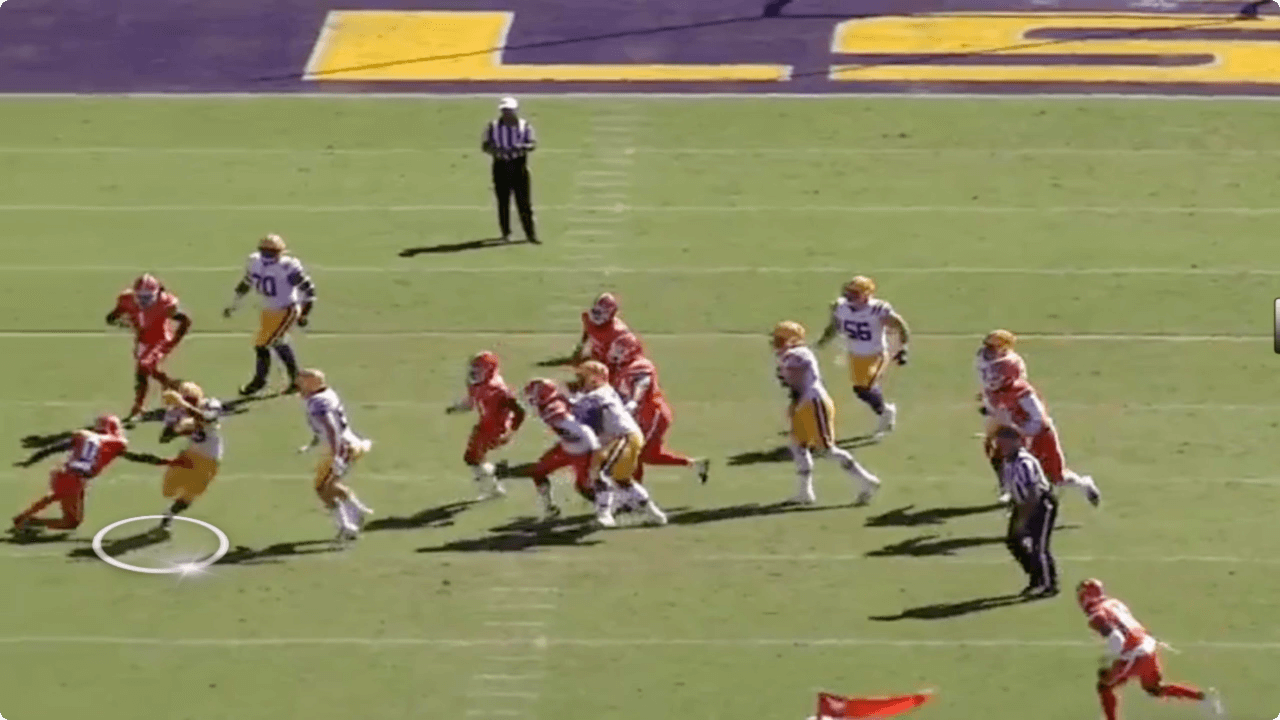 As he burst through the hole, he had to make a defender miss. He quickly cut inside of him without wasting time or space and got north and south. 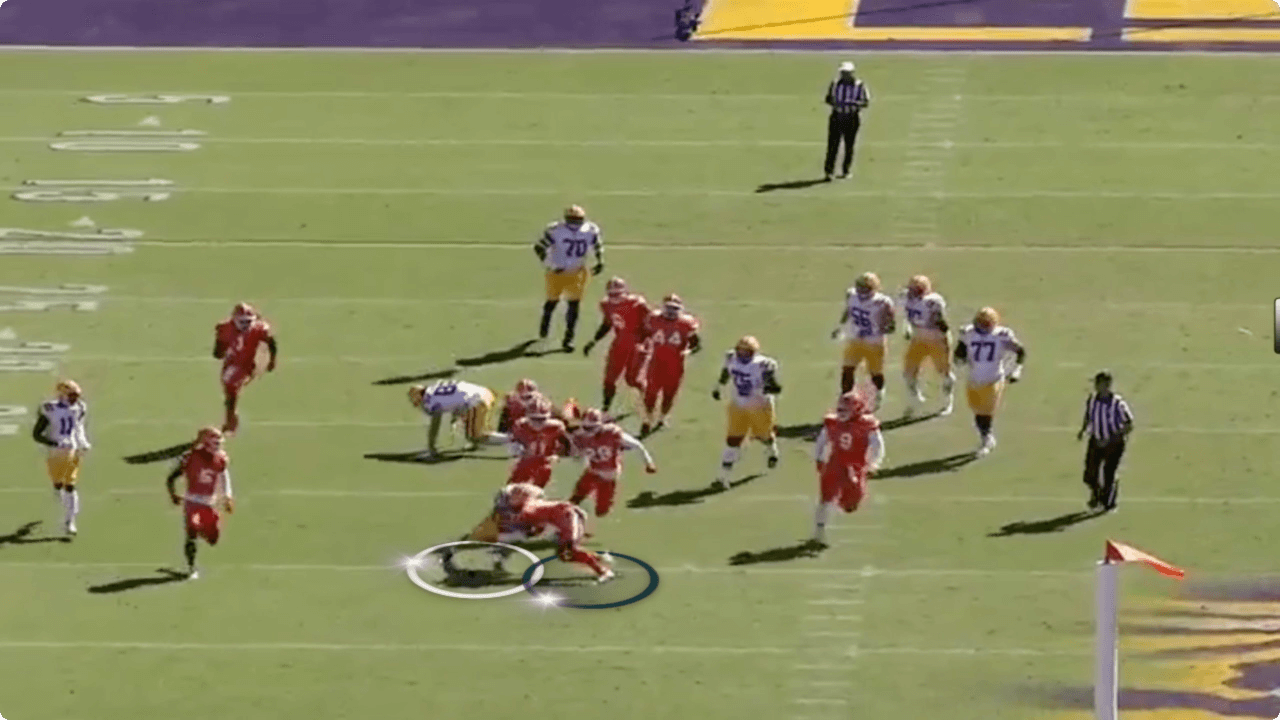 When Davis-Price gets to the second level, he does not dance around trying to break tackles – he wants to run over defensive backs. He is a taller running back (6-foot-0) but he routinely lowers his shoulder. On the play, he stepped into contact with his left foot and left shoulder to run over the safety. 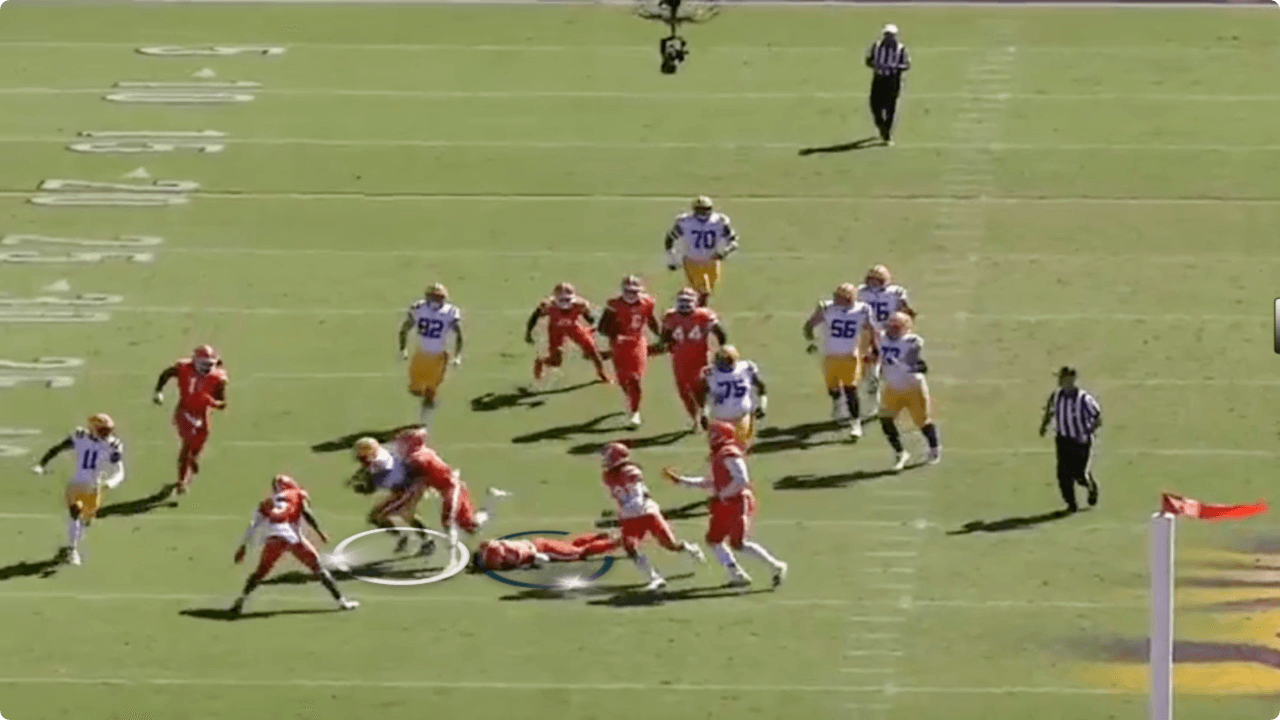 After flattening the safety, he dragged another defender for additional yardage.

Though the 49ers’ bread and butter is outside zone, they run more gap scheme (power, counter) than given credit for. Gap scheme runs are more effective against 6-1 fronts that defenses like to use against outside zone. Aside from depth, Davis-Price will give the 49ers a punishing runner when head coach Kyle Shanahan wants to give the defense a different look. Also, just because Davis-Price doesn’t look like a typical zone back does not mean he can not run outside zone.

San Francisco top scout Adam Peters told The Athletic’s Matt Barrows that even though Davis-Price was one of the biggest backs in the draft, he also recorded one of the top-five GPS speeds among running backs last season. When running outside zone, he has the speed to threaten the edge and the slashing ability to make one cut and move the pile.

Historically, Shanahan has preferred to have a smaller speedy receiver on the roster to take the top off defenses. When he called plays for the Falcons, Shanahan had Taylor Gabriel. Early with the 49ers, it was Marquise Goodwin. Last season, that guy was Travis Benjamin. However, Benjamin was seldom used and did not have a catch. Part of the reason for that is that Jimmy Garoppolo does not often throw deep.

With Trey Lance taking the reigns, the 49ers will presumably throw the ball downfield more. The 49ers have a talented receiving corps that specializes in getting yards after the catch but no true deep threat. Gray ran a 4.33 40 and that speed shows up on the film – he easily blew by college defenders.

On third-and-14, the defense blitzed SMU in hopes of forcing the quarterback to throw the ball quickly and short. Gray quickly beat press coverage. His quarterback chucked the ball up as soon as he hit the last step of his drop. Gray had about four steps of separation from the defensive back covering him but the pass was affected by the pressure and underthrown. Gray came back and snatched the ball out of the air.

Gray isn’t just a speed receiver. He’ll go up and get the ball in contested catch situations. The two biggest concerns with Gray are concentration drops (10 drops in 2021) and his lack of reps against press coverage versus high-level competition.

In his rookie year with the 49ers, he won’t be asked to be a big part of the offense. If he earns the trust of the coaching staff, he could get 1-2 deep targets per game as the team’s fastest receiver. Shanahan will help him avoid press coverage with motion, condensed formations and stacked alignment. Early on, he’ll frequently be asked to run the “Blazer” route. 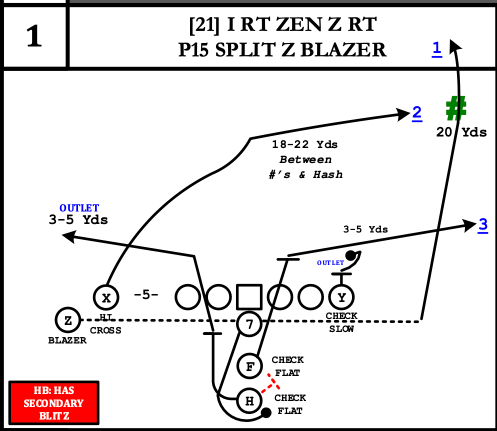 This concept is a hard play-action dropback, The blazer route is the quarterback’s first read when he finishes executing his fake. With a free release, Gray will have the time and space to use his 4.33 speed to get behind the defense. Gray doesn’t need to have big numbers to positively affect this offense, he just needs to catch enough deep passes to make defenses respect him and back off, which opens up the run game and space underneath for Samuel and tight end George Kittle.