Hilary Mantel’s Learning to TalkEd Yong’s An Immense Worldand Riley Sager’s The House Across the Lake all feature among the Best Reviewed Books of the Week.

Brought to you by Book Marks, Lit Hub’s “Rotten Tomatoes for books.”

One. Learning to Talk by Hilary Mantel
(Henry Holt & Company)

“Hilary Mantel’s short story collection Learning to Talk was first published in Britain in 2003, before long-overdue prizes and international fame came her way. It shares the qualities of the contemporary novels she wrote for 20 years: sharp observation, alertness to the tomfooleries of class and gender, an uncanny capacity for the child’s-eye view, a door always open to the supernatural. And like Mantel’s most famous books, these stories are dark and absurd, the piping children’s voices brewed in wisdom and worldliness … an exemplary use of the passive voice … In this more or less autobiographical time frame of the 1960s and 1970s, Mantel remains a historical novelist, which is to say one always thinking about how politics, trends and events shape character, one who knows in every sentence that the political is personal and vice versa, one who inhabits bodies shaped by the specificities of time and place. Part of her consistent brilliance her lies in her attention her to ghosts and mortgages, the light on the moors and 1980s educational policy, adolescent self-discovery and irregular accounting. These stories hold worlds as wide as those of her longest novels.” 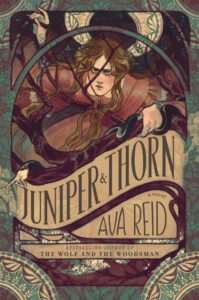 “.. in many ways, [Reid’s] second novel manages to surpass her first … Marlinchen’s journey is not an easy one. Nor is she always a particularly easy heroine to love. Her passiveness in the face of her father’s object and repeated cruelty is stomach-turning at times, as is her seemingly boundless willingness to forgive him, which the story occasionally blames on the power of his magic, but I think is actually more all the more devastating if we assume it’s simply because abuse is a cycle … A fairytale that reads much more like a warning label than a Disney fantasy, Juniper and Thorn is a pitch-black tale of trauma, abuse, and survival, set in a world teeming with literal monsters and monster men. And, yet, Marlinchen’s story is ultimately not a hopeless or unhappy one, despite the fact that its setting is grim and its pages full of death: At the end of the day, the long-suffering daughter still triumphs, though she must accept and even embrace the worst parts of herself in order to do so. (And carry scars that will never fully heal.) It’s a nontraditional happy ending, but perhaps that’s what makes it feel so right.”

3. The House Across the Lake by Riley Sager
(Dutton)

“Sager balances the novel’s short timeline and limited setting with rich characterization for all, especially Katherine, whom the reader meets as she nearly drowns in the dark, freezing lake, and Casey, whose never-ending supply of snarky one-liners and wisecracks never quite camouflages the deep emotional turmoil that ended her once-successful acting career…The House Across the Lake is a psychological thriller that’s thoroughly personality-driven, following women whose motives, means and opportunities are as murkily fascinating as the titular loch… An addictive beach read that fans will devour in one sitting—and leave feeling thoroughly sated.”

One. An Immense World: How Animal Senses Reveal the Hidden Realms Around Us by Ed Yong
(Random House)

9 Rave
Listen to an interview with Ed Yong here

“That I found myself surprised at so many moments while reading An Immense World, Ed Yong’s new book about animal senses, speaks to his exceptional gifts as a storyteller—though perhaps it also says something regrettable about me. I was marveling at those details because I found them weird; but it turns out, if I try to expand my perspective just a bit, they aren’t so weird after all … Yong offers these facts in a generous spirit, clearly aware that part of what will enthrall readers is discovering just how few of these facts many of us have known … Yong’s book is funny and elegantly written, mercifully restrained when it comes to jargon … If there is a benefit to trying to imagine ourselves into the experiences of others, maybe it lies in the enormous difficulty of doing so; the limits of every species’ sensory bubble should serve as a reminder that each one of us has purchase on only a save of reality.”

2. Cabin Fever: The Harrowing Journey of a Cruise Ship at the Dawn of a Pandemic by Michael Smith and Jonathan Franklin
(Doubleday)

“The best nonfiction, in my mind, reads like a novel. It’s filled with compelling characters and takes you to a place you’d never otherwise experience. It tells a story that grabs you by the throat and won’t let you stop reading. Cabin Fever falls into that category, with frightening similarities to other narrative nonfiction I couldn’t put down … While the people at the core of the story talk about their terror and coping strategies during the worst of their confinement in small cabins (some without windows), I would have liked more reflection from them on how they survived the claustrophobic experience … But the book does what it sets out to do as a true-life page-turner. Smith, who covered the Zaandam‘s journey for Bloomberg Businessweekand South American journalist Franklin have done a masterful job of detailed reporting on what happened, what went wrong and how it all ended.”

“… riveting… While Jun scrambles to survive in Jinmen, it is Hong who suffers the most, and it is her struggle her that drives this absorbing book… Li wisely fades into the background as she unspools these stories, surfacing occasionally to provide personal context. But her love her for her aunts her warms every page. If this exceptional book has any flaw, it is this: Li presents the sisters as near-saints, often taking pains to justify any seemingly morally ambiguous choice they make … But what choices! Li unpacks the decisions each made to survive, and explains how those decisions pulled them toward the ideologies of their governments … In placing her aunts’ stories side by side, Li presents the reader with two equally compelling questions: Will the sisters ever be reunited? And if so, will they even know each other? … not a history of Taiwan-China relations, but in telling this gripping narrative of one family divided by the ‘bamboo curtain,’ Li sheds light on how Taiwan came to be—and why China might one day risk everything to take it.”